Had I listened only to the promptings of my heart I should long since have responded to the cry of anguish and alarm sent forth by you a year ago on behalf of your country; I should have given expression to my fraternal sympathy and ardent good wishes to your Eminence and to your venerable brethren the Bishops of Ireland.

France, Catholic France, true to her natural instinct of generosity towards suffering, has always loved Ireland. Yes, we love the Irish race, so great amid trial, so obedient to the voice of its spiritual guides, and in spite of its long-drawn-out martyrdom so firm in its trust in Divine justice.
END_OF_DOCUMENT_TOKEN_TO_BE_REPLACED

Monsignor Dominique Castellan, Archbishop of Chambéry, sent the following letter in January, 1921, to Michael Cardinal Logue, Archbishop of Armagh and Primate of All Ireland:

At a moment of sorrow for the Church of France you have been good enough to incline yourself towards the poor diocese of Digne, and to come to the help of its priests and its Bishop. Ireland suffers today cruelly. The fires and the murders ring sorrowfully in your soul of a pastor and a father, but France has always loved Ireland. It would be shameful if in the present trial of Ireland the heart of France though itself fettered by a political alliance, and if the voice of her commiseration, cautiously suppressed, were not lifted in favour of your bruised nation.

I remember O’Connell and Lacordaire. I remember your heart so tender for all those who suffered and, even if I were to find myself alone I am anxious to raise my voice to address to you, pastor and father of Ireland, the testimony of my sympathy for you and for your people. 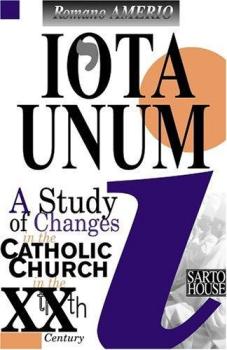 Angelus Press have made several chapters of Romano Amerio’s Iota Unum freely available online. (hat/tip to the ever knowledgeable Mundabor)

The Glorious Revolution: Church and Class

What did the Glorious Revolution of 1688-1689 achieve? Or, rather, what followed it and may have resulted from it? England is distinguished in Europe as the only country which achieved the transition from a peasant/craftsman economy to an industrial economy without a violent transformation of its political structures. The Glorious Revolution instituted political structures which were sufficiently flexible to accommodate economic change.

There are many aspects to this question, but the one on which I wish to concentrate is the elimination of the idea of government as a spiritual authority. This is not exactly the same thing as the elimination of the Church as a political power in the land. That had already been achieved; it was the principle work of the Reformation. The whole thrust of Lutheranism and Anglicanism was the subjection of the Church to the national government. Calvinism attempted to reverse the process and reassert the independent authority of the Church but everywhere it was defeated. It came closest to success in Scotland after the Glorious Revolution, but the defeat of the Church of Scotland was a major consequence—and purpose—of the Act of Union with England in 1707. This was shortly followed by patronage acts which asserted the authority of the British parliament over the Church.

END_OF_DOCUMENT_TOKEN_TO_BE_REPLACED

Devotion to the Sacred Heart 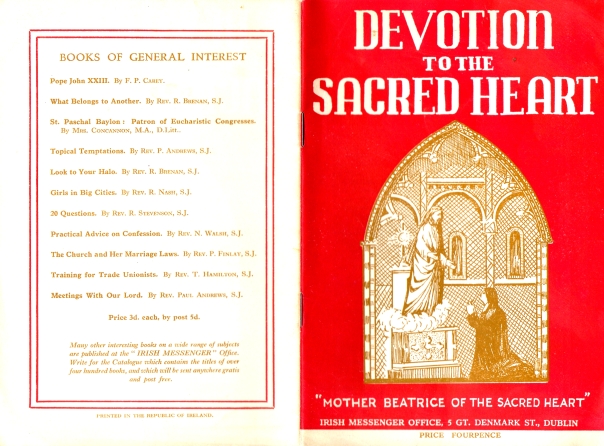 Letter of Cardinal Cullen to the Catholic Clergy, Secular and Regular, of the Diocese of Dublin

Within the present week an important circular regarding the Catholic University will be addressed to you by the Rector, the Very Rev. Monsignor Woodlock.

I beg of you to read that document for your faithful flocks, and at the same time to impress upon them the necessity of upholding the cause of religious education, and providing the youth of the country with the means of acquiring not only all useful scientific knowledge, but also solid instruction in the practices and doctrines of the one, holy, Catholic Church, out of which there is no salvation. If this be not done, and if children be not brought up in the fear and love of God, and inspired with a spirit of respect and obedience for the laws of God and the Church, they will forget the interests of their immortal souls, and their eternal salvation will be exposed to the greatest danger. For, according to the Scripture, if a young man gets into a wrong path, even when he grows old, he will not retire from it.
END_OF_DOCUMENT_TOKEN_TO_BE_REPLACED

Irish Society Before the Sixties: Insular or Outward Looking?

De Valera returning from the League of Nations. He served as president of the League’s congress in 1932 and of its assembly in 1938.

This is the first issue of Irish Foreign Affairs, a quarterly journal established to comment on foreign policy and on global affairs from an independent Irish perspective.

The Irish State was founded with a core foreign policy idea – the notion of the right of the Irish nation to have an independent state of its own and through that state to make a distinct mark in the world. The limits of this independence were necessarily first and foremost the ability of the state to develop and act free of British constraints.

Until the 1960s, Irish citizens took for granted that this was what the state was about. People knew the Proclamation of 1916 with its foreign policy position, and there was in general a remarkably high level of knowledge about foreign affairs. This knowledge of the world was not derivative of the British liberal media and was informed by commentaries from a uniquely Irish perspective in newspapers such as the Irish Press, various journals, and even in early RTE television.
END_OF_DOCUMENT_TOKEN_TO_BE_REPLACED

A Guide to Lourdes 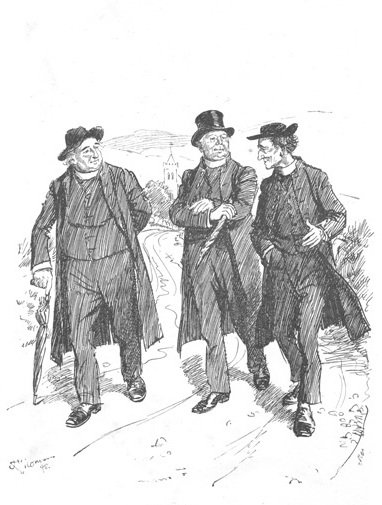 My own effort to get some facts, to relate particulars to the universal, to interpret such generalisations as I dared to form, has been haunted by misgivings. Ever since I accepted the invitation to read this paper I have been saying to myself: who am I to draw up the indictment of a nation? How does one take the pulse and the temperature of a people? My only excuse and encouragement is that each of you in the audience is better informed than myself, and therefore that each of you is even more keenly conscious of the difficulty of describing “the present position of Catholics in Ireland” than I am, so that I can count on your sympathy. The best I hope to do is to spark off discussion or contradiction on some points, so that you yourselves may complete and balance the picture, out of your better judgement and wider experience. At any rate, we shall be dwelling on matters about which we all care deeply: our own purposes are involved, as well as the great issues of Ireland’s Catholic future and her almost indispensable contribution to the Church in England and overseas.
END_OF_DOCUMENT_TOKEN_TO_BE_REPLACED 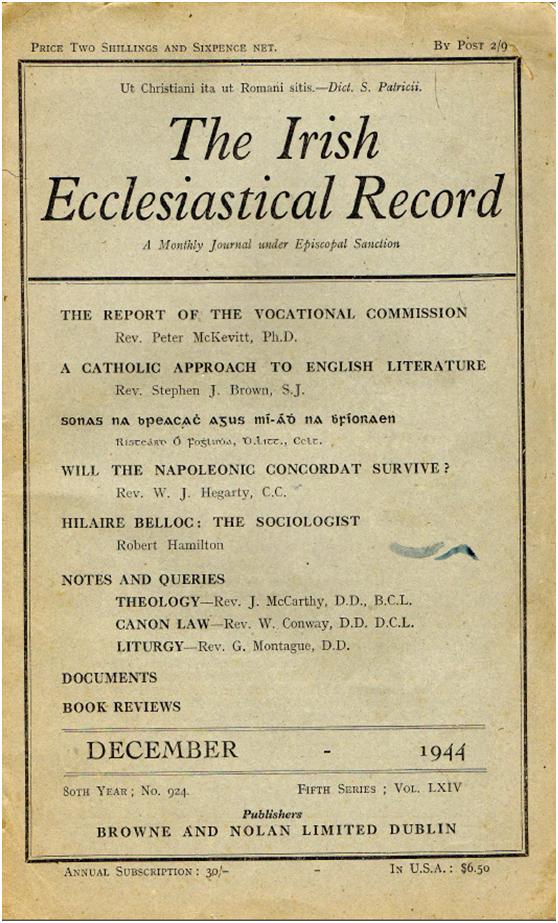 From the Irish Catholic Bulletin, January, 1938:

Seldom did we survey the world, at the turn of the year, in more critical circumstances than now; and only twice before did the affairs of our own country stand at so vital a turning point. The world to-day shivers in the shadow of a threat as dark as that which hung over it in the last months before the World War broke in 1914. Ireland, on the other hand, stands a new stage in her national progress; and we recall the New Year of 1919, and that of 1922.

At the New Year of 1919, Ireland was fresh from the General Election which authorised her leaders to set up Dáil Éireann and declare the nation’s independence. At the New Year of 1922, the Treaty which had been signed under an infamous threat of devastating war on civilians awaited approval or rejection, and Ireland was about to be condemned to the years of strife and decay which the approval, a few days later, drew down.

To-day, the Declaration of Independence of 1920 has been renewed, ratified by the electorate, and carried into effect, and an Independent Sovereign State came into being in the last days of 1937, while the New Year sees the nation embarked on the task of the recovery of the still-occupied Six Countries.

Truly, this is a momentous stage in Irish and world history. We will consider world affairs first.
END_OF_DOCUMENT_TOKEN_TO_BE_REPLACED