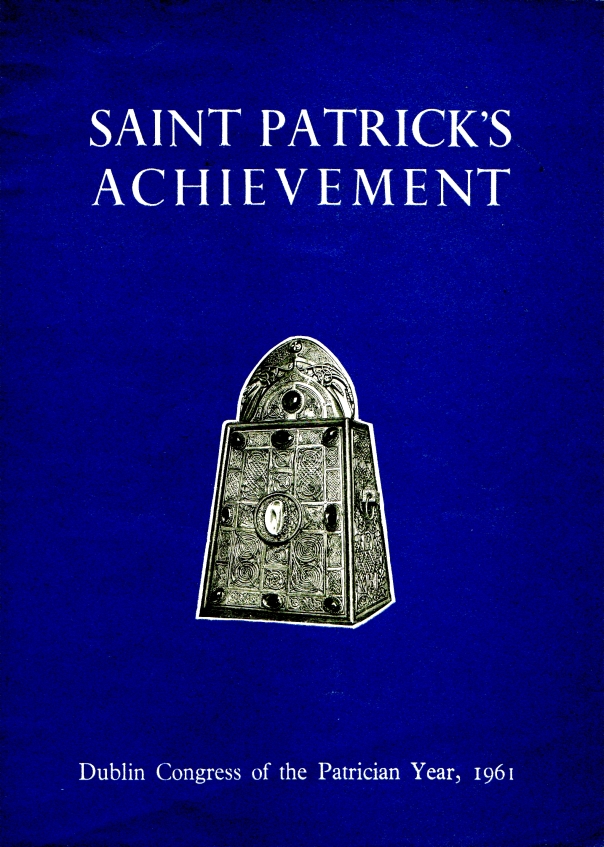 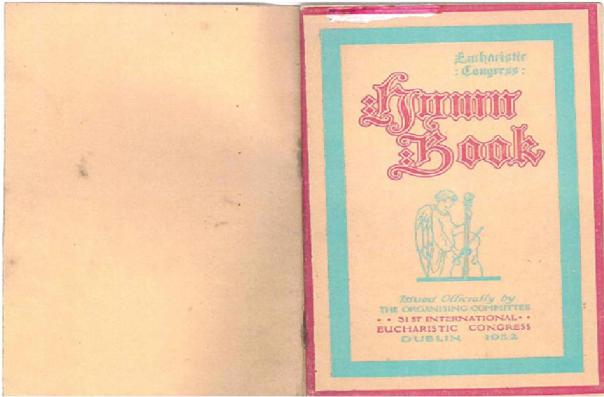 I’m very grateful to Jaykay (whose mother attended the childrens’ Mass in the Pheonix Park) for sending me this Hymn Book from the 1932 International Eucharistic Congress, Dublin. Jaykay notes that: 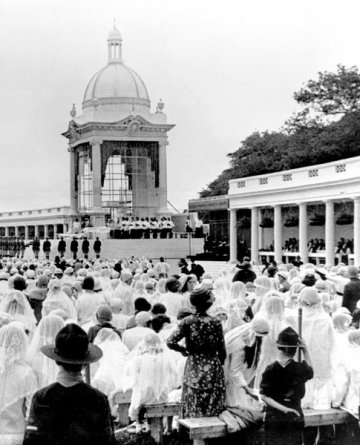 My mother would have been 12-13 at the time of the Congress. She had just started secondary in a convent school where they had a very good choir. They used to take part in Gregorian chant competitions for children and regularly won (now who says that there was no “participatio actuosa” prior to the new springtime in 1965??). Anyway, they had been prepared for months beforehand to take part in the children’s Mass in the Phoenix Park where the “Missa de Angelis” was sung, which was easy peasy to them – she told me they had about 4 other of the chant settings of the Mass which they sang regularly as well as the Te Deum and of course all the well-known ones such as Adoro Te and Veni Creator Spiritus etc. – not to mention the Dies Irae for the requiem.

So they went to Dublin on the train, in their confirmation dresses, and processed solemnly out to the Park for the Mass. Just imagine, thousands of kids – all immaculately disciplined – singing the Missa de Angelis!

I’m sure next year’s event will have something similar… NOT!!! We’ve definitely sung a new church into being 😦

UCC Gallery (takes a minute to load; click on the photo subtitles to enlarge)

NLI Gallery (click on the photos on the right to enlarge)

A MILLION PEOPLE KNEEL IN WORSHIP

Rory O’Dwyer, a young historian at UCC, recently wrote a very good book on the Congress — which you can purchase here. He has an interesting overview of the Congress in History Ireland here.

The Doctrine and Proof of Papal Infallibility 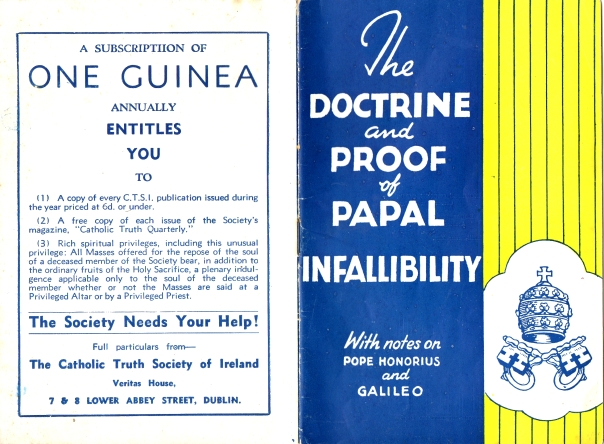 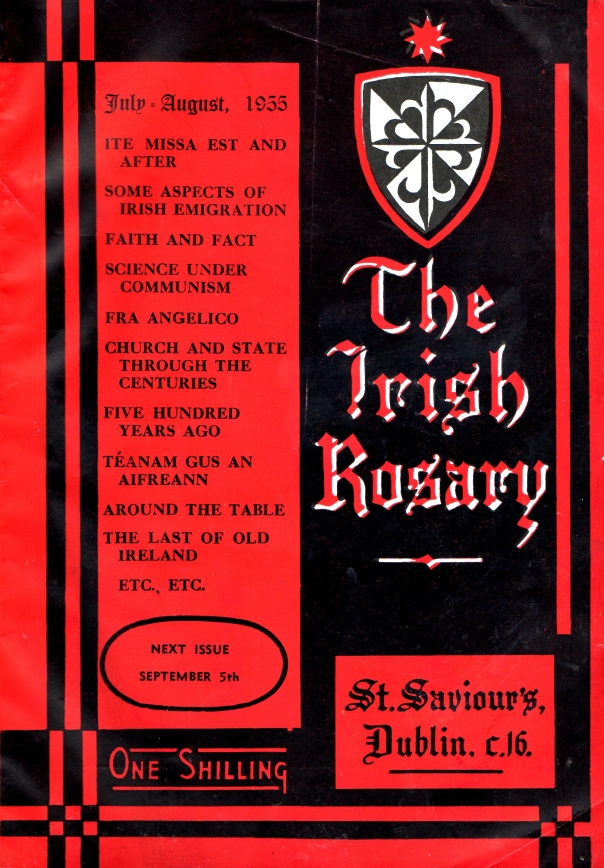 Holy Church, founded by Christ Jesus to free mankind from death, shines throughout the world by her sanctity, is nourished by grace, lives by truth and, in the words of Saint Irenaeus, “as the sun, God’s creature, is one and the same in the whole world, so the light, which the preaching of truth is, shines forth in every place and enlightens all men” (Adv. Haer. 1, 10, 2; MG f. 552). This preaching of truth, Beloved Son and Venerable Brothers, is a special glory of your country — for through the centuries its distinguishing mark has always been: “peregrinari pro Christo”. Irish priests and religious, as is well known, from the coming of the Gospel message to their land, spurred on by the splendid example of Saint Patrick, your illustrious Father and Apostle, went forth and made their way through many European lands to bring them the flame of faith and an unconquerable zeal in winning souls for Christ.

The genius of your nation has won for the Church in Ireland imperishable renown and admiration among the many peoples who owe their Christian origin and development to the burning love of Irish Apostles and to their active priestly ministry. These Catholic people in themselves are a manifest and an eloquent testimony to Catholic Ireland’s missionary character; they show it forth to the whole world and add splendour to its titles to glory.
END_OF_DOCUMENT_TOKEN_TO_BE_REPLACED

The following letter was addressed to Cardinal John D’Alton, Archbishop of Armagh and Primate of All-Ireland, on the occassion of the opening of the Patrician Year celebrations, 17th March, 1961.

The fifteenth centenary of the death of Saint Patrick, the Apostle of the Irish, is about to be celebrated with fitting solemnity throughout Ireland, particularly in his own episcopal city.

As soon as We learned of this forthcoming celebration, We desired to extend Our warm congratulations to you, Beloved Son, and to your zealous colleagues in the hierarchy, on your intelligent foresight and on your zeal for religion. Because one result of this commemoration will be — as We confidently hope and believe — that greater attention will be focused on recording events of the saint’s life and the sterling Irish people will be moved, as they see more clearly the incomparable benefits which Saint Patrick brought them, to imitate his example and to follow his footsteps in leading their Christian lives.
END_OF_DOCUMENT_TOKEN_TO_BE_REPLACED 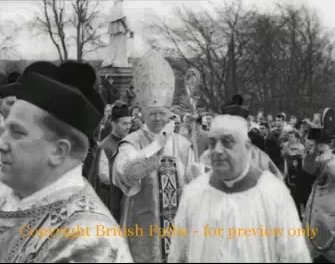 The above video features clips of the opening of the Patrician Year celebrations, 17th March, 1961, marked by Pontifical High Mass in St. Patrick’s Cathedral, Armagh. The celebrant was the papal legate, Cardinal James Francis McIntyre, Archbishop of Los Angelus.

Irish state dignitaries were very prominent in attendance, not least President Éamonn de Valera and the Taoiseach [Prime Minister] Séan Lemass. Church prelates and state leaders, escorted by prominent local clergy, walked in solemn procession towards the Cathedral, walking past vast, cheering crowds. President De Valera was seated in a special blue and gold draped prie-dieu, affixed with the national emblem of a golden harp, while Mr. Lemass was also accorded a special prie-dieu. As Cardinal McIntyre entered through the massive oak doors, the cathedral organ thundered out the papal hymn Tu es Petrus, and His Eminence proceeded through the highly colourful and lavishly decorated cathedral to the marble-canopied throne on the Gospel side of the high altar, where he occupied a seat upholstered by white silk, affixed with the papal coat of arms on the reverse. Prelates attending included multitudes of abbots and bishops from all over the world, 50 archbishops and 4 Cardinals: Cardinal McIntyre, Cardinal John D’Alton, Archbishop of Armagh and Primate of All-Ireland, Cardinal William Godfrey, Archbishop of Westminster, and Cardinal Richard Cushing, Archbishop of Boston.

“Their sound has gone forth unto all the earth: and their words unto the ends of the world.” (Psalm 18, Verse 5)

The theme of Ireland’s holy and historic celebration this year has been taken from the text by which the liturgy proclaims the glory and the triumph of all the Apostles. No more appropriate text could have been chosen to commemorate the incomparable Apostle to Ireland and to pay tribute to the apostolic spirit that St. Patrick inspired in the Irish people.

The text proper to the Apostles is deservedly applied to him, for St. Patrick takes his place beside the greatest and most glorious of the Apostles.

END_OF_DOCUMENT_TOKEN_TO_BE_REPLACED 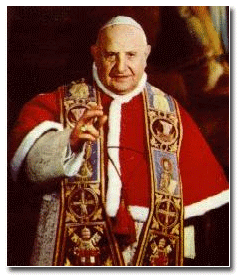 Addressing a congregation of 500 in the Consistorial Hall of the Vatican after Mass on the 17th March 1961, the Holy Father gave the following address:

Dia is Muire dhibh is Pádraig.

On this day, the faithful people of Ireland, in their own beloved country and in every part of the world, are celebrating the liturgical feast of Saint Patrick, the fearless apostle and father of their faith, in the fifteenth centenary of his holy death.

You, beloved children of the Irish colony in Rome, have wished to gather in prayer at the altar of the Divine Sacrifice, around the humble successor of Saint Peter. With great pleasure did We accede to your filial desire: not only in order to render this occasion memorable, but especially in order to bear open witness to the esteem and affection which We cherish in Our heart for your glorious nation.
END_OF_DOCUMENT_TOKEN_TO_BE_REPLACED

The Catholic Church and the Gospels 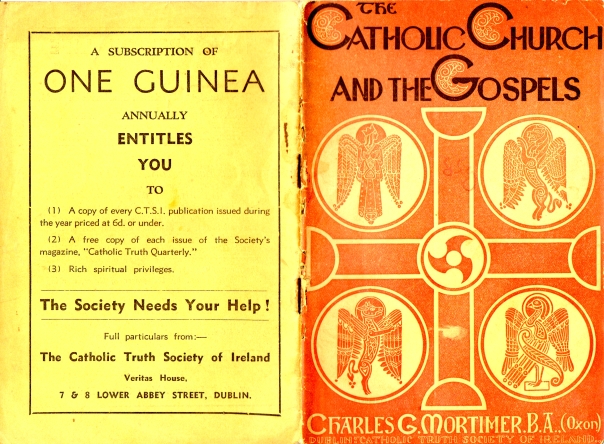 Song for the Pope 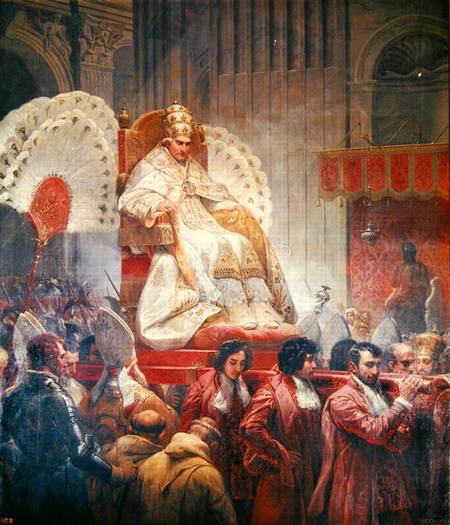 A song for the Pope, for the Royal Pope,
Who rules from sea to sea;
Whose kingdom or sceptre never can fail! —
What a grand old king is he!
No Warrior hordes has he, with their swords,
His rock built throne to guard;
For against it the gates of hell shall war
In vain, as they ever have warred.

Oh, never did mightiest monarch yet,
In the days of his power and pride,
Rule as the good old Pontiff rules,
With his Cardinals by his side.
In terror and death is the conqueror’s march,
As the steel tides rise and roll:
But the bonds he binds with are faith and love,
Clasping the heart and soul.
END_OF_DOCUMENT_TOKEN_TO_BE_REPLACED

St Peter and His Successors 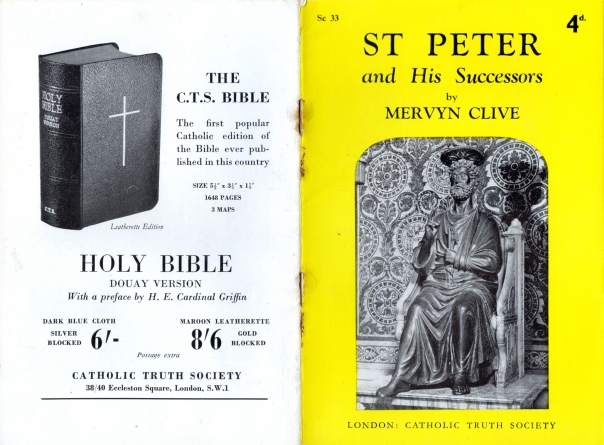 The Pope is Infallible 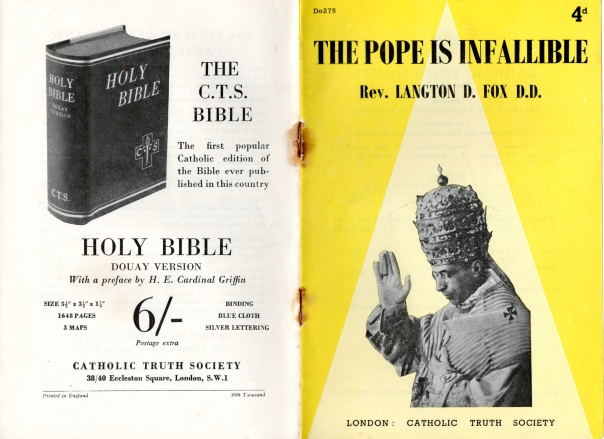 To Start You Thinking 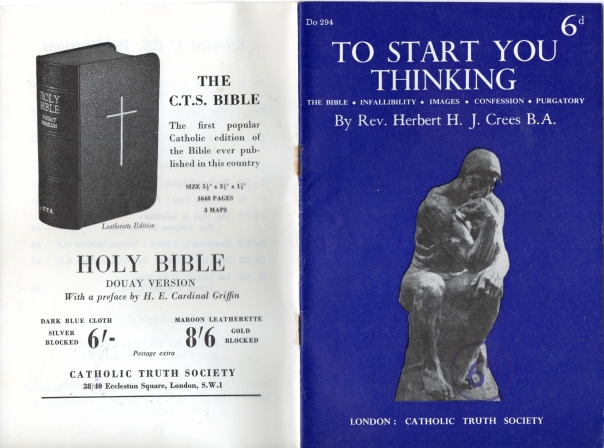 The Rock of Peter 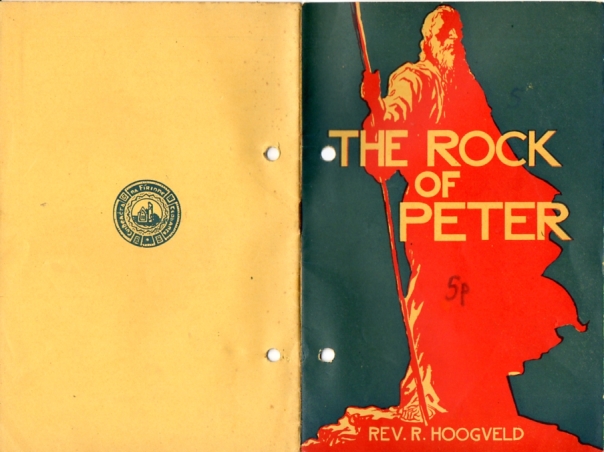