The Messenger Question Box (No. 1 and 2)

The Irish Messenger of the Sacred Heart, a monthly Jesuit devotional magazine, has been an integral part of the Irish religious landscape since its foundation by Fr Paul Cullen, S.J., in 1888. The magazine cultivated an intense devotional life and penetrated every parish on the island, reaching a peasantry that was both desperately poor and devoutly Catholic by means of an elaborate voluntary distribution system. Up until a few decades ago, it was not uncommon for the sole reading material in many rural households to be the monthly Sacred Heart Messenger.

One noteable feature of the publication was the ‘Messenger Box’ column, where readers would ask questions about various aspects of the Catholic faith, and have those questions answered by Jesuit priests. The column gives an insight into the internal temper of a popular religious culture that was then flourishing but rapidly disintegrated after the Second Vatican Council (1962-1965). Some of the questions in the pamphlets are quite amusing in their innocence and piety:

Q. – May a person who inadvertently tastes milk, but does not swallow it before going to Mass, receive Holy Communion that Morning?
A. – Yes.

Q. – Is it sinful to inhale the smoke of cigarettes before going to Holy Communion?
A. – No, though out of reverence to the Blessed Sacrament a person is advised to refrain from so doing.

Published in 1935 and 1938, these special pamphlets reproduce questions featured in the Sacred Heart Messenger in the previous few years. In those days the Messenger was the most widely read publication in Ireland. Despite the secularization of Irish society since the 1960s, the Messenger retains a readership of over 300,000, making it the second most popular publication in the country (after the RTÉ TV Guide). 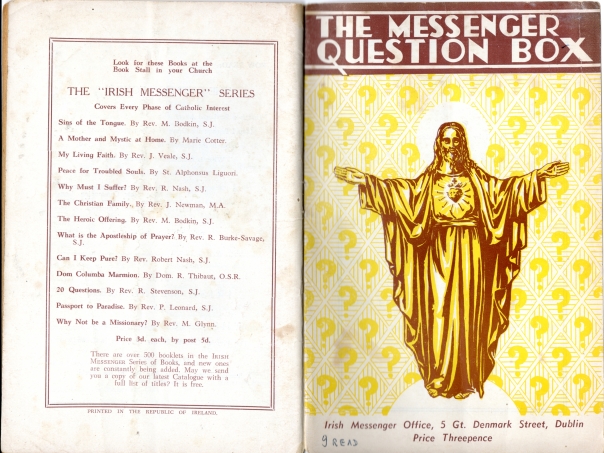 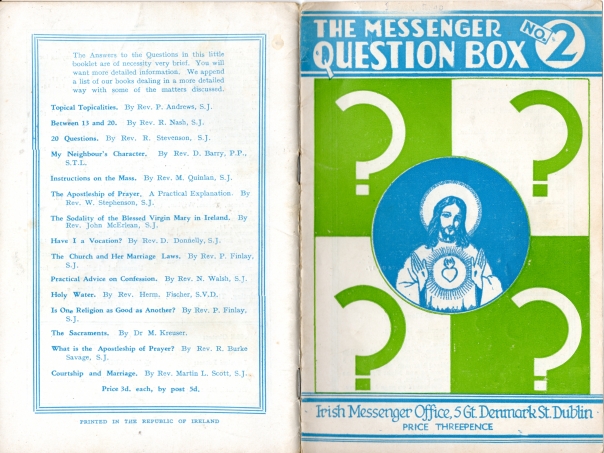