Will the Irish Stay Christian?

There is no reason to suppose that the Irish Catholic people will continue indefinitely to be believing Christians. In Europe during the last one hundred and fifty years the majority of people have abandoned Christian belief and practice; there is no reason why the same should not happen here.

Sweden is often cited as an extreme example of modern paganism. But eighty years ago it was the scene of impassioned public controversies about the nature of Christ’s Redemption and the proper ordering of the Communion service; wide sections of the people believed these matters to be of urgent concern.
END_OF_DOCUMENT_TOKEN_TO_BE_REPLACED

Anticipating Liturgical Reform in the 1950s 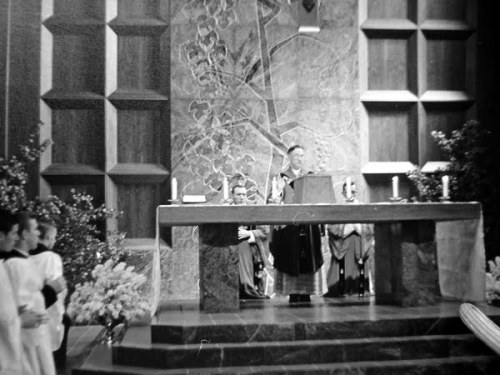 Fr Reynold Hillenbrand celebrating Mass in 1957 at the Church of the Sacred Heart, Hubbard’s Woods, Illinois

The following is an extract from an article on ‘Active Participation in the Mass’ by Rev. John Fennelly, P.P., published in Doctrine and Life, November, 1955.

Discussion on the introduction of the vernacular into the Mass rite itself would be outside the scope of this article. An increasing volume of liturgical opinion favours a limited use of it in the forepart of the Mass. The Mass of Catechumens would therefore resume its former role and primary function of instructing the people. At the International Liturgical Congress in Lugano (1953), a strong recommendation was forwarded to Rome by the delegates assembled, that the Collects, Epistle and Gospel should be heard directly from the sacred minister or ministers in the language of the people. Permission to use the vernacular in the administration of some of the Sacraments has been granted to many countries.

The use of the vernacular by the people is a totally different matter. A notable change has taken place within the past thirty years in Church policy with regard to hymns and prayers for popular use at quasi-liturgical functions like a Holy Hour. The general tendency nowadays is to encourage the people to pray and sing in their own tongue. The Germans are permitted to sing the common of the High Mass in German. It does not seem reasonable to force Latin on the ordinary congregation, if the people can be permitted to ‘pray the Mass’ in a language they understand.

[…] Fr. Pius Parsch, an Austrian, who died in 1954, is credited with the discovery of the best method of popular participation devised in our time. Fr. Clifford Howell, S.J., the well-known writer and apostle of the liturgical movement, thus describes it in an article in the Catholic Herald, of April 30th, 1954. ‘Fr Parsch had many remarkable achievements in the practical sphere. He is likely to be remembered best for a certain form of communal public Mass called the Betsingmesse (“Prayer-hymn-Mass”), which has now spread throughout the whole of Austria and Germany. This is a very practical and logical combination of two forms already in use: the Missa recitata or Dialogue Mass and hymn-singing during Mass.’

[…] Common prayer, seasoned with a little singing, is a reasonable contribution to ask from the faithful towards the splendour, dignity and social character of the Sacred Mysteries. It is the most and the least to expect from the average congregation assembled for Mass in the Parish Church here in Ireland or, perhaps, anywhere.

[…] And though Penal days are long gone by, the people have not regained their voice or attempted to take their rightful place in the Sacred Liturgy […] Few are prepared to maintain that the Plain Chant revival movement, into which the schools have thrown themselves wholeheartedly, has yielded the results expected of it.

[…] The social and liturgical movements now stirring the Church are closely connected and inter-dependent. One cannot succeed without the other. Both set out to correct excessive Individualism and lead to the formation of the Christian community. Both derive their inspiration from the doctrine of the Mystical Body. Neither movement can be hurried. A whole generation may pass away before the social and liturgical teaching of the Popes becomes an active force influencing the public mind and penetrating into the sanctuary of the Church.

[…] It has been noticed that both these reform movements within the Church make striking progress in areas where the Church is subjected to severe pressure. At the International Liturgical Congress of Lugano, 1953, Bishop Weskham, of Berlin, could testify to the rapid progress of every kind of liturgical endeavour in the part of his diocese under Soviet control.

[…] There is no denying that the Roman Mass rite, as it stands, is ill-adjusted for teaching the populace or training their minds towards active, intelligent, and social participation. Fr. Clifford Howell, S.J., goes into this matter fully in his popular book on the Liturgy The Work of Our Redemption. Not only is there a lack of adjustment between the individualistic-minded laity and the communal-minded Liturgy, there is also an element of aloofness and elusiveness in the liturgy itself. In addition to the barrier of language, there exists a number of features that militate against intimacy. That is particularly noticeable at a low Mass. The priest has his back to the people and even when proclaiming the good tidings of the Gospel, does not face them. The present Mass rite and the rubrics governing its celebration were framed in the sixteenth century, at a time when participation on the part of the people was at its lowest ebb. Little change has been made since the time of St. Pius V. […] Admission of the vernacular into the Mass rite would, at the time, have been equivalent to sanctioning doctrinal error and opening the door to devotional and liturgical chaos […] The matter can now be debated on its merits.

[…] Many are unconscious of strong currents of social and liturgical reform moving within the Church, and, therefore, fail to understand a desire for change even when it is proved that the ‘innovation’ is a return to earlier and sounder tradition. They have no sympathy with the Pastor who would like to celebrate Mass facing his people at a small liturgical altar situated well down the Church, or who wishes for a revival of the Offertory Procession, the singing of the people during the distribution of Holy Communion, of the employment of Lectors to read the Collects, Epistle and Gospel of the day in the language of the people. These reforms are pressed for in regions where the Church can no longer control the school, and where religious education of any kind is banned in state schools.

[…] The new Easter Vigil rite incorporates many features that have long been desired by advocates of liturgical reform. It seems to be a portent of what may be expected in time to come. The Holy See will proceed slowly and with due regard for varying national conditions. But it cannot be doubted the liturgy has begun to move out of a feudal or ‘fossilised’ state.

[…] Should Pastors wait until reform measures are completed, or ought they take steps to prepare the minds of the people — especially youth — for impending change using the best means at present available? Mediator Dei leaves no room for doubt as to which course should be followed: ‘Strive earnestly, by methods and means which your prudence judges most effective, to bring about a close union between clergy and laity: that the faithful may take so active a part in the liturgy that it becomes really a sacred action in which both priest — especially the priest in his own parish — and people join in offering to Almighty God the worship which is His due’. Work on the people and with the people may begin under the direction of the Pastor with the approval and sanction of ecclesiastical authority.