← Statement of the Hierarchy of England and Wales on Contraception, May 7th, 1964
The Inspiration of the Bible →

Archbishop John Charles McQuaid: “No change will worry the tranquility of your Christian lives” 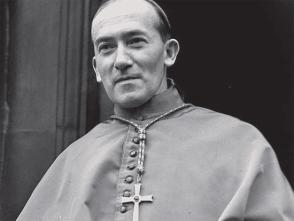 The following sermon (posted below) was given by the Most Rev. John Charles McQuaid, Archbishop of Dublin and Primate of Ireland, at thanksgiving devotions in the Dublin Pro-Cathedral on the 9th December, 1965. Following the devotions — which had been organized in response to the specific requests of Pope Paul VI — the Archbishop imparted Benediction, at which the Te Deum was sung.

The sentence quoted in the title is often represented by Establishment commenters (whether media, academic, or ecclesiastical) as epitomical of Archbishop McQuaid’s reactionary attitude towards change in the Church.

During the first session of the Second Vatican Council, Archbishop McQuaid distinguished himself as the only member of the Irish hierarchy to make a contribution — and did so from a predictably conservative standpoint. As a lover of Latin language and culture, he viewed proposals for an all-vernacular liturgy as tantamount to vandalism. He also expressed his opposition towards suggestions that competence over the local liturgy be transferred from individual bishops to national episcopal conferences.  Xavier Rynne (the chronicler of the Council) records that “Archbishop McQuaid of Dublin came out once more against any thought of change”. Sensing the progressive trajectory of the Council (as well as the lack of receptivity towards his conservative positions) he remained aloof from the next three sessions.

Archbishop McQuaid took a low view of ‘aggiornamento’ and found it very hard to adapt to the rapidly changing Church of the 1960s. Indeed, he has been demonized ever since as an obscurantist authoritarian. His implementation of the liturgical reforms was very conservative, and frustrated more radical, younger clergy (some of whom would later defend his legacy against lazy liberal caricatures).

For five long years the bishops of the world have been sustained by your constant prayers. In the very laborious session of the Council we have felt the power of your prayers, and if the Council was concluded in a spirit of peace and unanimity we owe that grace to God the Holy Ghost and to the intercessions of Our Blessed Lady.

On Wednesday, 2,300 fathers parted. It was a sad moment, for we shall never again see one another in this life. Drawn from every corner of the world, the Bishops had prayed and worked together for a long time.

Now is our work completed: in union with the Pope, our decrees were drafted, voted on and preached. One could not but feel that God the Holy Ghost had guided our deliberations and gently brought them to a firm conclusion. You may, in the last four years, have been disturbed by reports about the Council. May I, who have assisted at every meeting of the Council, assure you that the Council was a wondrous example of dignity, seriousness and courtesy.

You may have been worried by talk of changes to come. Allow me to reassure you. No change will worry the tranquility of your Christian lives. For, time after time, Pope John XXIII and our present Holy Father have insisted — but the point has been sadly missed — that our deliberations in the Council had only one purpose: to search the deposit of the Faith, to look more deeply into the teaching of the Church.

The Council has one meaning only for us — in all its constitutions and decrees: how can each one of us in his personal and family and social life be faithful to the teaching of Jesus Christ, Our Lord, as the Church makes known that teaching in the Vatican Council.

As the months will pass, the Holy Father will instruct us gradually how to put into effect the enactments of the Council. With complete loyalty, as children of the one, true Church, we fully accept each and every decree of the Vatican Council.

← Statement of the Hierarchy of England and Wales on Contraception, May 7th, 1964
The Inspiration of the Bible →